In this article we’ll take a look at the main reasons for the error Disk boot failure, insert system disk and press Enter when you turn on the computer, and how to solve this problem.

When you turn on the computer, the BIOS starts first, and only after that the operating system boot starts. If the BIOS can’t find the boot device (drive), you will certainly see the error message “Disk Boot Failure” on the screen. The process of the system boot stops at this point.

This error does not always mean that your hard drive is failure. Before you take it to service center, try to fix the problem by yourself.

Let’s take a look at some of the main reasons why a computer might not see the boot drive.

First of all, try to remember if you have installed new devices on your computer and whether the BIOS settings changed before this error occurred. If you made changes to the configuration of the system, try to return the computer to its initial state.

If your computer is an old one and equipped with a floppy drive, check if a floppy disk is inserted into it. The same goes for CD/DVD discs and external USB HDDs or flash drives. If there are no boot records on them and you have USB selected as the first boot device in BIOS/UEFI, then when you turn on the computer, you will receive a Disk Boot Failure error. Try to disconnect all external storage devices and reboot the computer.

In the screenshot below you can see that Removable Devices are used as the first boot device, if they are not available – it’s booting from the hard disk. Try to move the Hard Drive item above in the list. 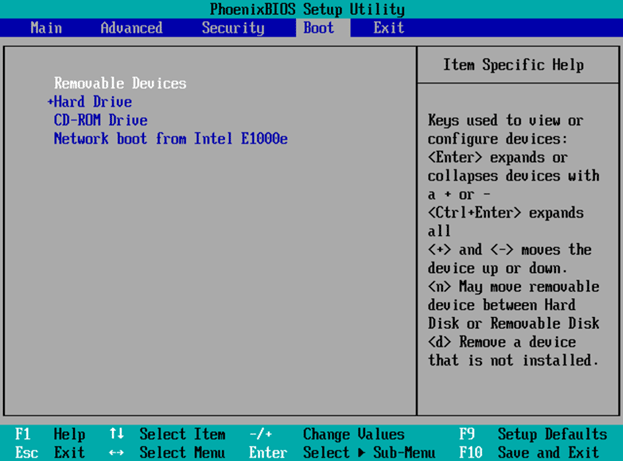 In case you have recently connected a new disk, make sure that the old drive is higher in the list of boot devices (you can temporarily disable the new drive).

Check If Your Hard Disk is Detected by the BIOS

In some computers, which chipset controller supports IDE/SATA devices in the BIOS settings, you can set the HDD operation mode. If you selected an incorrect disk mode, the BIOS will not see your drive.

READ ALSO:  How to Use iPad as Second Monitor on Windows?

In the BIOS Award option, which determines the mode of operation of the drive is called On-Chip Serial ATA. Switch it to Enhanced Mode, Combined Mode or Auto.

If these steps didn’t help you fix the problem, turn off the computer and open the cover of your computer case. It is advisable to check the reliability of the connection, as well as the absence of damage on the flex cable that your hard drive is connected to the motherboard, as well as power cable (from IDE disks). Try to connect the drive using another cable. On older IDE drives, it makes sense to check the status of the Master and Slave jumpers.

Turn on the computer. If the disk is not detected even after that – most likely, it is defective. Check it on another computer, and in case you are facing error Disk boot failure again – take the disk to a service center.